Trout Unlimited had a productive year in New York in 2019. So productive, in fact, that three new staff were added to the Northeast Habitat Program to expand TU's conservation efforts in New York.

Jo-Anne Humphreys is TU’s stream restoration specialist. Jacob Fetterman is the new Project Coordinator for the Battenkill Home Rivers Initiative, and Caroline Shafer is the New York Field Technician based in Stamford, N.Y.

Director of Veterans Service Partnership, Mike Banaszewski, moved back to New York state, where he will be directing the national VSP program. Mike can answer any questions related to our work with veterans and is looking for ways to engage with local chapters.

Jen Orr-Greene joined TU in January and will take over Dave Kinney’s role as the Mid-Atlantic Policy Director. 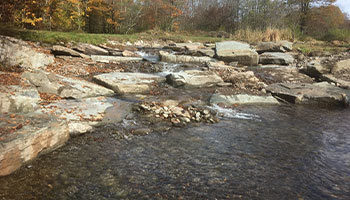 One of TU’s national priorities is to improve access to critical coldwater habitat for trout and other stream-dwelling creatures.